THE OTHER SIDE TV | Season Five Trailer from The Other Side on YouTube.

The Other Side is a half-hour doc series that follows a team of paranormal investigators who, with the guidance of an Aboriginal Elder, seek the truth behind Canada’s real life hauntings. 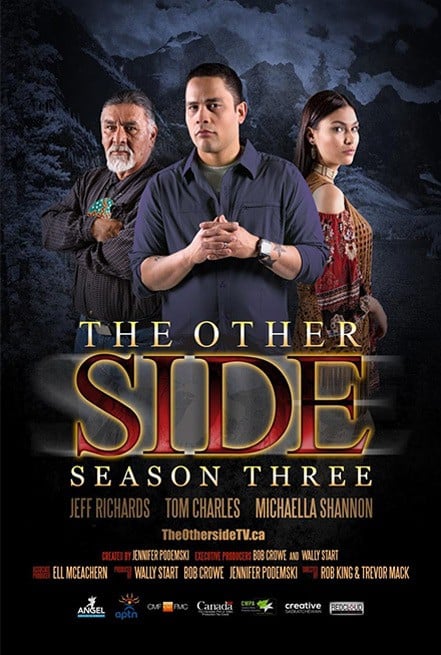 Controversial mentalist Jeff Richards, paranormal researcher Bill Connelly, and journalist Priscilla Wolf, have teamed up with Aboriginal Elder and Spiritual Intuitive, Tom Charles to embark on a paranormal expedition across Canada. At each location, the team sets up infra red technology and K2 meters to determine the presence of spirits. Once they connect, they begin to communicate with the displaced spirit, learning who they were and why they have not yet moved on.

The case is then turned over to, Tom Charles to corroborate with the team’s findings. In Tom’s sixty-odd years he has solved hundreds of missing person cases by channeling what can only be explained as, an otherworldly intuition. He uses this intuition when he consults with the team to explain the spirit’s presence before performing the vital ceremony that will help guide the lost spirit to the other side.

Helmed by Gemini Award-winning Director, Rob King, The Other Side is a supernatural investigation with a Native heartbeat that takes viewers on a riveting journey into the unknown.